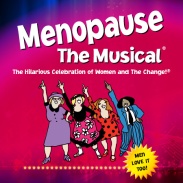 As a twenty-eight year old male, I am pretty sure that I am far from eligible from experiencing Menopause. I have heard a fair share of the interestingly dinner timed stories from relatives that somehow made me want to stop eating cocktail sauce and seafood. Luckily, I am fortunate enough to have witnessed Menopause the Musical at the Welk Resorts Theatre in Escondido which gave me a much more light-hearted glimpse into what women go through when experiencing this change. By light-hearted, I mean that the show was full of laughs that not only managed to put a smile on my face, but also warn me of what to expect with my future wife.

My experience, however, did not start at the theatre, but at a partnering restaurant called the Canyon Grille. As part of package deal with show, I was instructed to arrive at this restaurant where I would receive a meal. Upon arrival and speaking to a  waitress, a waiter then escorted me to an outdoor patio with a small fountain where I was instructed to sit at a preset table and that my meal would arrive shortly. The garden vegetable soup that he placed before me had a spice to it that warmed me up. I received a grilled chicken covered in white sauce and peas atop mashed potatoes over steamed vegetables. The chicken had a smoky flavor from the grill and the sauce had a similar taste to that of country gravy. The mashed potatoes were the best part as they had a smooth buttery garlic taste to them that made me want more, but sadly disappeared too quickly somehow. The vegetables were also good as they had a naturally sweet taste to them. Following the chicken, was a fudge brownie with chocolate chips covered with chocolate syrup and nicely cut strawberry. The strawberry tasted like a strawberry. The brownie, however, was interesting because there was three different tastes. The brownie, a lighter chocolate taste from the chips, and the darker chocolate taste from the syrup. While everything else was good, that brownie was excellent.

Once finished with the meal, I made my way to the theatre and made my way to the seating area where I patiently waited for the show to start. To begin everything, a theatre assistant introduced herself. I was definitely interesting as she provided information about Menopause that I was unaware of, the musical and all the good it has done for women all across America, and some jokes involving menopause. As the youngest of the ten males that were in the audience, I can only express how comfortable I was as the women in audience began shouting answers involving sex, nudging me and others to signal us to laugh at their own jokes, and the occasional “men need to shut up” comment which would proceed with another nudge. It was at that point I was convinced that some of the women in there believed me to be gay, but I didn’t say anything. When finished, the lights dimmed and the curtains raised.

The show began as a Soap Star (Eileen Bowman), an Iowa Housewife (Milinda Glib), a Earth Lady (Bets Malone), and a Profession Woman (Anise Ritchie) were talking on phones to either family or business contacts before they begin to fight over a bra in the lingerie section. From there, they lay one musical song after another accompanied by jokes upon jokes all revolving around the experiences of menopause. For one hour and thirty minutes nonstop they sing and joke about the heat flashes, weight gain, memory loss, mood swings, among other things that occur during menopause. They sang parodies to well-known 90s musical numbers and pop culture songs. They played the audience as there was a couple numbers where the actresses entered the seating area. Some enjoyed it so much, that at times the laughter was so loud that I couldn’t tell if some of the audience members were laughing or screaming.

Overall, it was an enjoyable time. The stage presentation alone was well done and the singing was phenomenal. The amount of practice that was spent in vocal training definitely showed as these women sang with all the talent as someone on American idol. The music was loud and clear and the jokes were well written as well as nonstop. Additionally, there’s something wonderful about taking a subject that many don’t enjoy talking about and turning it in a light hearted performance. I am happy to say that I had a good time and that the show is well worth the view. 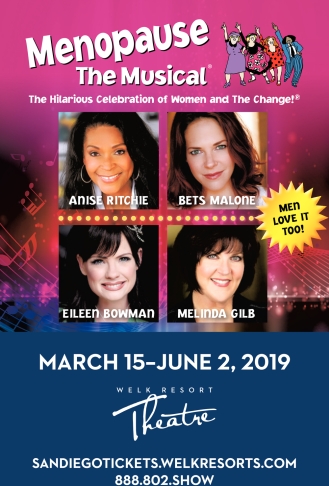 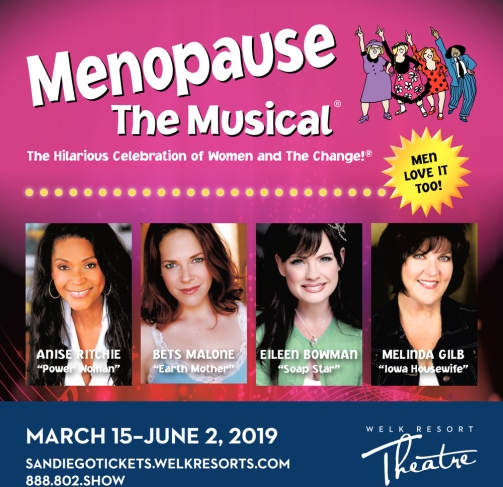 Overview:
COME JOIN OUR SISTERHOOD! Four women at a lingerie sale with nothing in common but a black lace bra AND memory loss, hot flashes, night sweats, not enough sex, too much sex and more! This hilarious musical parody set to classic tunes from the ‘60s, ‘70s and ‘80s will have you cheering and dancing in the aisles! See what millions of women worldwide have been laughing about for 16 years! It’s the Hilarious Celebration of Women and The Change!

Pre-show meal available. Meal precedes the show. Meal seating starts at 11:15am for matinee shows and 5:15pm for evening performances.

Summary:
Menopause The Musical’ is set in a Bloomingdale’s where four women meet while shopping for a black lace bra at a lingerie sale. After noticing their similarities, they joke about and bond over their woeful hot flashes, mood swings, wrinkles, weight gain and celebrate that menopause is no longer ‘The Silent Passage.’ The Welk Theatre production runs through June 2 and features a powerhouse cast of Anise Ritchie, Eileen Bowman, Melinda Gilb and Bets Malone, directed and choreographed by Natalie Nucci. 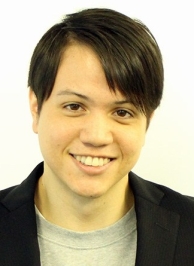 Eddieson Burkhalter | Writing Contributor
B.A | Japanese | San Diego State Univ.
My name is Eddieson. I’m an open minded dreamer that likes to look for new opportunities, experiences, and challenges in life to make things a bit more interesting. After graduating from San Diego State University with a Japanese degree and minor in Business,  I landed an office job in Shinjuku, Japan where I dealt with online marketing matters as well as content creation. Though I come from an international business background I could never escape the alluring call of an emotionally manipulating story, regardless of the medium, that could turn the toughest body builder into a two year old child watching The Muppets and eating “pig newtons”. So long as the story is well done it doesn’t matter to me whether it’s presented as a comic, video game, anime, book, movie, or even an interpretive dance with bananas and jello. After some intense independent study I have not only been more than inspired to join the industry, but brought to a point where I wonder why I gave up pursuing this stuff in college and turned to a course of pulling my hair out before each exam. Regardless, I love stories and hope to be presented with the opportunity to tell my own; most likely through writing. With a fire in my heart and goals set I am actively gaining skills each day to hopefully one day help others in their endeavors as well as achieve my own dreams. |Instagram @BlaEddieBla| View My Blogs 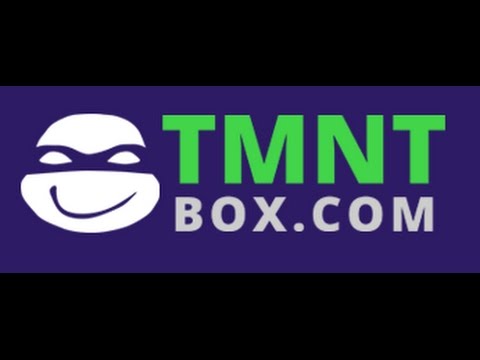